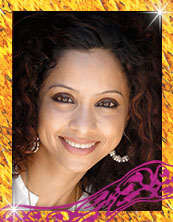 During the span of her career, thus far, multi talented Carol R. Furtado has excelled as a dancer, actress, model and designer. Indian born, of Portuguese descent Carol holds a degree in Sociology, but her true passion has always remained dance and she feels more at home in the world of show business than anywhere else.

Carol literally danced her way into a career as she got her big break when a budding choreographer spotted her dancing at a local club and offered her the opportunity to become a professional dancer.

Carol’s first major performance was at the MTV Launch in Bangalore (1996) where she performed alongside Slash of Guns & Roses fame. The same year she performed with Shweta Shetty (India’s top female pop performer at that time) which led to her first international appearance in Nepal. The following year Carol was featured in the music video ‘Bari Barsi’ with Baba Sehgal, the pioneer of rap music in India.

1997 took Carol to the ICCR – the China Art Festival in Beijing, Shanghai, Hong-Kong and Chengdu. And the same year Carol performed alongside Stereo Nation during their tour of India. By 1999 Carol had expanded her global experiences by touring Holland, U.S. and Canada with singer Kumar Sanu and Sri Lanka with Bavana. The year ended on a high as Carol partnered with Bollywood superstar Akshay Kumar to perform at the prestigious South Filmfare Awards.

In the past decade Carol has been on a dance tour of the U.S., Canada, West Indies and London with Asha Bhosle and Adnan Sami. A tour to the U.S. with India’s leading film-musician duo, Laxmikant- Pyarelal, performing with the likes of dandia queen Falguni Pathak, Kavita Krishnamurthy, Nitin Mukesh and Vinod Rathod. And performing and sharing the stage with several renowned performers, musicians & entertainers like AR Rehman, Alka Yagnik, Udit Narayan, SB Balasubramanyam, Sukhvinder, Shankar Mahadevan, Javed Jaffrey, Chitra, Sadhna Sargham, Colonial Cousins (Lezz & Hariharan), and STOMP, both in India and internationally (U.S. and Canada).

Carol has been back on the catwalk for Tony & Guy (TiGi), Levis and several Indian Fashion houses and has been featured modelling Rohit Verma Creations in the international fashion magazine La Mode.

For the past 12 years Carol has also found the time to design and produce dance costumes for a U.S. based Dance Company called Naach.

In 2006, her wide experience in dance, acting & modelling enabled Carol to take up a new challenge as the female protagonist, Ayesha Merchant, in ‘The Merchants of Bollywood’. She has performed over a thousand shows all over the world during the 5 years that she was a part of the show. Despite the staggering statistics Carol never allowed monotony to settle into her performances. According to her the variety in the type of audiences the show brought in ensured that things never got dull and work was always a fun place to be considering she got to perform everywhere- from the Great Wall of China to the Statue of Liberty.

Carol took a break from the musical in 2011 to focus on starting her own business manufacturing apparel and designing and producing costumes for international dance schools. And as much as she loves exploring her creativity by designing, she has been unable to deny her true calling in front of the spotlight and has now returned to the production to reprise her role as the heroine of the show.