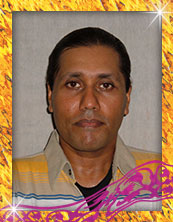 Joy Fernandes has over 20 years of experience on stage. Before Merchants of Bollywood, he was part of Tim Supple’s critically acclaimed production of William Shakespeare’s ‘A Midsummer Night’s Dream’, where he played the comic lead, Nick Bottom. The play had several successful shows in India, UK, USA, Australia, Canada and Verona.

In India, Joy has acted, written, directed and produced many plays that have performed extensively in Mumbai and other parts of the country. Joy has co-authoured a book for children. He conducts theatre & corporate training workshops for every age and personality profile. Joy has acted in Bollywood movies like Jajantaram Mamantaram, One two ka four, Dasvidanya, Agyaat, No Smoking, Paanch, Pagalpan etc. He has acted in and scripted for television shows and ad films. Joy conceives, writes, directs and hosts events and shows. What is salient about most of Joy’s work is his flair and love for Comedy!